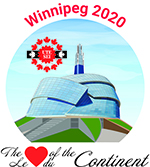 Further information concerning the UTE Convention and Convention Committees will be provided at a later date.