CAS Can Do It - The campaign continues 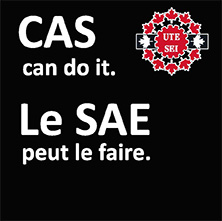 The CAS Can Do It Campaign is underway across the country.  The goal is to have CRA pay its employees directly from the CAS system, rather than the failed Phoenix pay system.  With less than a month to go, we are impressed with the number of cards and hard work put in by our local representatives and support of our members.  We are asking you to get as many cards as you can signed at Labour Day functions and any other events where your local is present, including Membership Appreciation Events.

Some Locals have had nearly 100% of their cards signed, and that is great.  Extra cards can be signed by family members, as they are affected by the failed Phoenix pay system as well.  If you have not signed a card, or wish to take some home, please see your local steward or executive member.